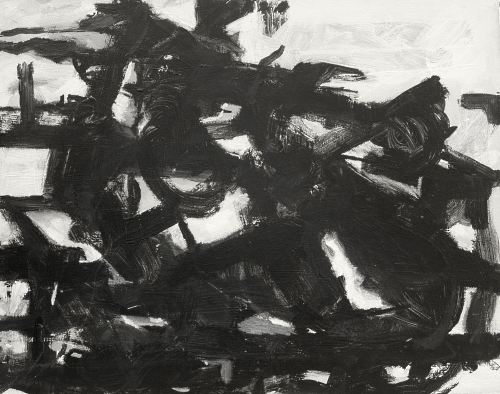 'Demolition (study)' (2005) Acrylic on canvas
"Art is purposely useless and that's what makes it more free than buildings."


"The pristine white walls of the gallery are unreal. I want to celebrate the cracks in the paint as I apply it to the cardboard."


My practice principally focused around drawing and the photographic document, addresses the relationship between architectural remains and the varying responses they create. At present, my work is centred on studying post-industrial sites in south Wales, many of which have witnessed significant changes since the early 1980s.

When researching a site, I am typically drawn toward the periphery, recording overlooked or prosaic traces. This includes photographing or drawing debris from vernacular buildings left behind by demolition or clearing. I also utilise imagery from a range of sources such as public archives to inexpensive postcards purchased from sellers such as eBay.

I regard drawing from the photographic document as a space for beginning a process of translation and redirection which encourages further reflection from the viewer. I am keen to avoid associations with the picturesque, which are often associated with traditional landscape representation. Rather, I see my work as responding to palimpsests or traces that reside within landscapes rather than a preoccupation with vistas.

Fragmented remains constructed from concrete - previously perceived as the material of modernity and progress - paradoxically now hover between memory and oblivion, drawing out wider reactions including loathing and aesthetic attraction. This is an area I find particularly engaging and something which is evident in my work.

I am influenced by the work of George Shaw, Carlos Bunga and Jem Southam; the work of the New Topographics, especially Bernd and Hilla Becher and Frank Gohlke has also been pivotal. Projects such as Robert Smithson’s A Tour of the Monuments of Passaic, New Jersey (1967) have acted as important touchstones for my practice in exploring the potential of the post-industrial wasteland. Various texts by W. G. Sebald, Italo Calvino, Lebbeus Woods, Paul Virilio and J.G.Ballard have also informed my thinking.

I see my artistic practice as responding to architectural sites in south Wales which have become culturally invisible. While fitting into a wider history of record and documentary photography in Wales, the artistic responses I create extend this tradition by offering a space for pause and further reflection.